I Am Isabel the Storyteller

#45 Can a kid break a rule even though the “caretaker” hasn’t laid down the rules? What’s next for me, Isabel Scheherazade? Hint: It requires going to Ye Olde Coffee Shoppe.

How’d you know I was at court?

It’s a new procedure, Mimi says.  They call when anyone’s absent, just to make sure.

Mimi nods. Yes, to make sure the student is sick and not abducted, or some such.

Cray*,  I think. We all ponder kidnapping for a few seconds, I break the silence with, How did you know I’d be here? At court?

Remember the day you pulled the newspaper out of the bookshelves? Pop looks at me. Then he looks at Mim and they do that thing where they communicate for a few paragraphs without talking.

Mimi takes over, Isabel, we were going to take you back to school and talk later, but let’s do this. We have until the boys get out of Kindergarten.  In between now and then, we’ll…

I interrupt. We’ll go to the hearing?

No. Pop’s one raised eyebrow goes to a full frown. We’ll get some sandwiches and drinks  at Belle’s and explain things to you. We’ll talk, and you’ll listen.

Mimi puts her hand on his arm and gives him a small frown.

Wow, I think to myself. “I’ll talk and you’ll listen” sounds just like Dad used to when I’d done something wrong and he was fed up with “All the Nonsense.”

I don’t know why, but suddenly I begin to feel safer or something like safe. Secure maybe. Secure the way a Native American baby in a papoose must feel when there’s no way to be anywhere but on its mother’s back. All cozy. I wish Oliver had stayed. He would have liked this part. 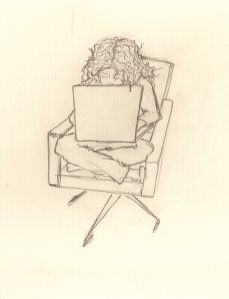 Filed Under: Going to Live with Grandparents, How A Kid Copes with the Death of Her Parents, how to deal with the person who killed your parents, I Am Isabel Scheherazade, Isabel Scheherazade Continues Her Stories, Isabel the Storyteller, kids and courts--what's appropriate, kids and grieving from a kid's perspective, lead the wide-awake life by writing it down, learn to pay attention by deciding to capture it in you notebook, learning to do new things with the grandparents who take over bringing up the orphaned kids, Notebook Keepers Lead Wider-Awake Lives, Storyteller, Uncategorized, When Parents Die, Write to Capture What's Happening
Tags: Isabel is learning how it will be : Isabel Scheherazade-storyteller and grabber : Isabel's thwarted : Mimi and Pop get a little tougher : Olivia leaves : the grandparents explain about the hearing